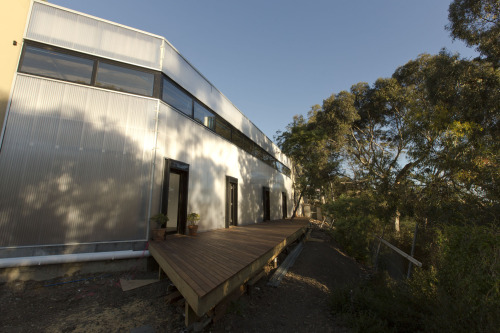 Project Overview: He & Eve contracted Edge to undertake a Limited Phase II environmental assessment prior to a potential acquisition of the site by our client and to develop it by placing a caretaker’s (residential) dwelling above the existing warehouse and small offices space. Hence, in May 2013, a Membrane Interface Probe (MIP) investigation was carried out on-site over two days, with five holes being advanced around the site. Two of the three detectors on the MIP (FID and Halogen Specific Detector or XSD) were employed to identify any methane (from any historic landfilling operations) and chlorinated hydrocarbons (i.e. from a drycleaning operation upstream of the site), respectively. This investigation follows the preparation of a Limited Phase I Environmental Investigation, August 2012, prepared by Edge for He & Eve. Project Outcomes: The results of the MIP investigation indicated the following: • Methane was not detected at any shallow depth on-site (i.e. not greater than 3.9 metres below surface); and • No chlorinated hydrocarbons were detected (both in soil and groundwater). Further, no uncharacteristic/strong odours of an industrial nature or putrescible waste (or presence of) were detected in the soil profiles obtained from three representative holes. No such odours were also identified from the groundwater residue on the MIP from one of the holes investigated. Based on the above and given that the MIP was conducted with an FID in-situ, which detects methane: • The EPA action level (EPA 788.1, 2010) for methane at the subsurface services on and adjacent to the site of 1% v/v is expected to not have been exceeded; and • No other non-invasive monitoring using an FID was warranted on-site as instead, invasive screening using FID technology was conducted as indicated above. Since Edge’s investigation, the client has purchased the site and has converted it into the BIGBANG Studios with a (caretaker’s) residential dwelling on top of the warehouse type building.