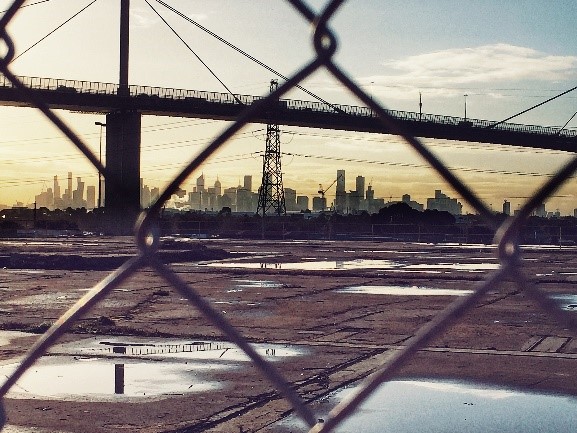 • The Site comprises four (4) separate areas within close proximity to each other, totalling 14.7 ha. The largest area, where the majority of industrial operations occur, is approximately 7.88 ha. Key Contaminants • Petroleum hydrocarbons are the key contaminant of concern at the Site. However, due to the size of the Site and multiple industrial processes occurring, a range of chemicals have been identified as potential contaminants. • Metals in on-Site stormwater are known to be present at high concentrations posing a risk to nearby surface water receptors. • Off-site contamination sources also extend onto the Site. As such, groundwater beneath the Site is known to be detrimentally impacted by free phase fuel on groundwater. Issues • EPA regulation with regards to potential soil and groundwater contamination. • A Site-wide stormwater assessment was also considered necessary to completely evaluate the current risk to nearby surface water receptors. Strategy • A detailed soil investigation was conducted across the area of Site pertaining to the majority of industrial operations. The soil investigation targeted key areas of potential concern (AoPC) that were identified in a preliminary site investigation (desktop investigation). • The preliminary site investigation and identification of AoPCs allowed the development of a succinct scope of work to be undertaken in the form of a detailed soil investigation. Ultimately, this strategy allowed a cost-effective and efficient approach to characterising contamination at the Site. • A stormwater investigation scope was developed following the detailed review of all historical stormwater information pertaining to the Site, including an Environmental Audit Report and several rounds of stormwater monitoring data. • The collation of historical data and review of historical reports allowed Edge to identify data gaps and ultimately design the stormwater investigation scope to close out questions relating to the type, presence and source of stormwater contamination. Outcomes • Minor soil contamination was characterised. • The soil contamination was vertically delineated by the Edge field staff, which was a critical factor in concluding that the likely risk of groundwater contamination sourced from the site is low. • The stormwater investigation was completed in an efficient manner, closing out historical data gaps and providing a detailed description of the current condition of stormwater discharging from the Site. • To assist in regulatory closure, Edge presented all of these findings in the form of Environmental Investigation Reports to the EPA. • Over the duration of investigative works, Edge ensured that all works were conducted in accordance with relevant HSE legislation and no notifiable incidents were recorded.